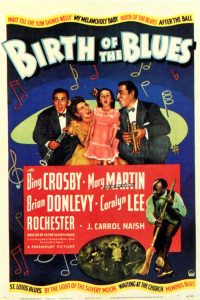 Synopsis: Jeff grows up near Basin Street in New Orleans, playing his clarinet with the dock workers. He puts together a band, the Basin Street Hot-Shots, which includes a cornet player, Memphis. They struggle to get their jazz music accepted by the cafe society of the city. Betty Lou joins their band as a singer and gets Louie to show her how to do scat singing. Memphis and Jeff both fall in love with Betty Lou.

Note: I didn’t find a trailer. Above is a clip from the film.