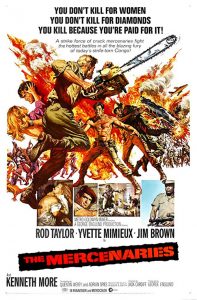 Synopsis: British commando, Captain Curry, is hired by President Ubi of war-torn Congo, to steal $50 million in uncut diamonds from a time-locked vault before the separatist Simba army that’s fighting Ubi’s forces and the UN peacekeepers overruns the remote town where the bank that holds the vault is located. Curry teams up with his friend Ruffo, Doctor Wreid, who’s an alcoholic, and Henlein, a sadistic Nazi who left Germany after WWII to work as a mercenary. The mercenaries reach the town by Ubi’s train after surviving an attack from the UN peacekeepers, only to find a number of terrified Westerners who were driven out from their homes by force, including torture, rape and murder, by the Simba rebels. They agree to help them leave town and befriend one of them, a pretty widow called Claire whose husband was murdered by the rebels. As their mission nears completion everything suddenly goes horribly wrong and the story culminates in an orgy of sadistic graphic violence as Henlein betrays the group and the rebels arrive to brutalize and slaughter the whites. However, Curry still plans to complete his mission no matter what.