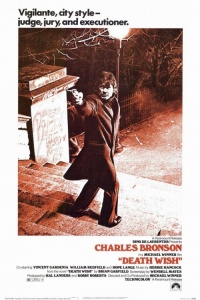 Synopsis: A New York City architect becomes a one-man vigilante squad after his wife is murdered by street punks in which he randomly goes out and kills would-be muggers on the mean streets after dark.

Note: It has been rumored that Denzel Washington played one of the alley thugs at around 47 minutes (albeit uncredited). While the actor in the film may bear a resemblance, Washington confirmed in a 2016 interview with Yahoo! that he did not appear in the film nor had he even started acting yet in 1974. Washington also stated in the interview that he saw it added to his IMDb page.  [IMDB] The listing is not currently on his page.