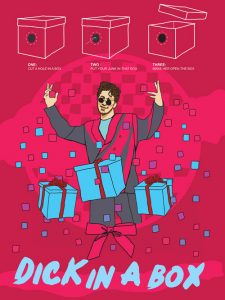 Synopsis: Music video for “Dick in a Box” by The Lonely Island featuring Justin Timberlake.

Note: Premiered on Saturday Night Live S32 E09 in December 2006. A censored version of the video aired on television. Above is the uncensored version (which is not dirtier, just the word dick is not bleeped).