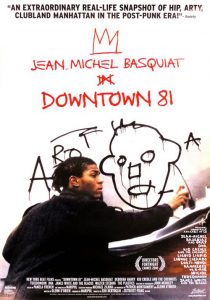 Synopsis: The film is a day in the life of a young artist, Jean Michel Basquiat, who needs to raise money to reclaim the apartment from which he has been evicted. He wanders the downtown streets carrying a painting he hopes to sell, encountering friends, whose lives (and performances) we peek into. He finally manages to sell his painting to a wealthy female admirer, but he’s paid by check. Low on cash, he spends the evening wandering from club to club, looking for a beautiful girl he had met earlier, so he’ll have a place to spend the night. Downtown 81 not only captures one of the most interesting and lively artists of the twentieth century as he is poised for fame, but it is a slice of life from one of the most exciting periods in American culture, with the emergence of new wave music, new painting, hip hop and graffiti.

Note: Original Title: New York Beat Movie. Financial problems prevented the post-production and release of the film. Subsequently, parts of the film became lost over the years. After much searching, the missing materials were located in 1998. Finally, post production began in 1999 and the film was released in 2000. The original soundtrack became destroyed over the years. The producers were able to get most of the original cast to re-dub their dialogue. But Jean Michel Basquiat died in 1988. So Saul Williams was hired to dub Basquiat’s dialogue. [IMDB]. I would need to watch this film to better identify people.