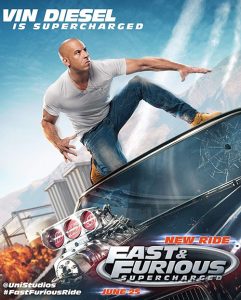 Synopsis: In this all new ride at Universal Studios Hollywood, join the all-star cast from the hit movies on an exhilarating high-speed chase that exceeds 120 miles per hour and catapults you into the high-stakes underworld of fast cars and international crime cartels. You’ll be engulfed in a world of cutting-edge, hyper-realistic special effects, including 3D-HD imagery projected onto the world’s most expansive 360-degree screens!