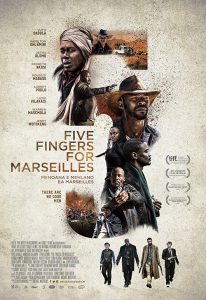 Synopsis: Twenty years ago, the young ‘Five Fingers’ fought for the rural town of Marseilles, against brutal police oppression. Now, after fleeing in disgrace, freedom-fighter-turned-‘outlaw’ Tau returns to Marseilles, seeking only a peaceful pastoral life. When he finds the town under new threat, he must reluctantly fight to free it. Will the Five Fingers ride again? READ REVIEW

Note: Premiered at the Toronto International Film Festival (TIFF) September 8, 2017. Thishiwe Ziqubu was in the original cast list in 2017 but not in the final list.