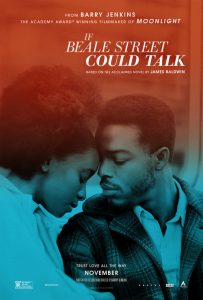 Synopsis: Baldwin’s novel “follows Tish, a newly engaged Harlem woman who races against the clock to prove her lover’s innocence while carrying their first born child. It’s a celebration of love told through the story of a young couple, their families, and their lives.” READ REVIEW

Note: Premiere at NYFF56 in 2018. Danny Freeman and Kiz Hippy are missing from the final cast list.