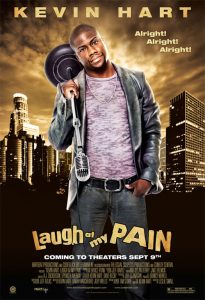 Synopsis:  “Hartbeat Productions and CODEBLACK Entertainment are proud to bring you the historical, record-breaking and side-splitting stand-up of Kevin Hart on the big screen. The theatrical release of LAUGH AT MY PAIN, the movie is your opportunity to experience the show that quickly became a national phenomenon. Catch the original, never-before-seen Raw and Uncut backstage footage, and travel back to Philly with Kevin Hart where he began his journey to become one of the funniest comedians of all time. John Sellers of The Wrap says, “Hart’s highly successful ‘Laugh at My Pain’ stand-up tour has turned him into a hot commodity in Hollywood.” Get an up-close and personal look at one of the funniest comedians in history and get ready to laugh ‘til it hurts. ”