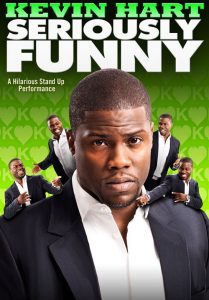 Synopsis:  Voted the top comedian of 2009 by Humor Mill Magazine, Kevin Hart stars in his second solo stand-up performance live from Cleveland, Ohio. “Seriously Funny” features Kevin Hart performing in front of a sold out crowd at the Allen Theater – where he delivers his hilarious and unique brand of comedy. In this unforgettable night of comedy, Kevin Hart is in rare form and funny as ever!