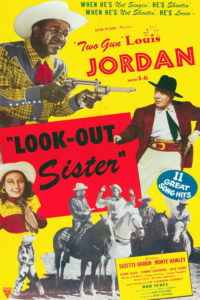 Synopsis: A famous bandleader, suffering from overwork and exhaustion, goes to a sanitarium for a rest. While there he dreams of being out west at a dude ranch, where he finds himself involved in the beautiful owner’s struggle to keep her ranch from falling into the hands of the villain, who wants either her or her ranch (or, preferably, both).

Note: James Jackson played with both the Loumell Morgan Trio and Louis Jordan’s band. I wasn’t able to identify which diver was Anice Clark or Dorothy Seamans.