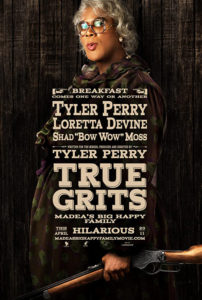 Synopsis: Madea jumps into action when her niece Shirley receives distressing news about her health. All Shirley wants is to gather her three adult children around her and share the news as a family. But Tammy, Kimberly, and Byron are too distracted by their own problems: Tammy can’t manage her unruly children or her broken marriage; Kimberly is gripped with anger and takes it out on her husband; and Byron, after spending two years in jail, is under pressure to deal drugs again. It’s up to Madea, with the help of the equally rambunctious Aunt Bam, to gather the clan together and make things right the only way she knows how: with a lot of tough love, laughter – and the revelation of a long-buried family secret.