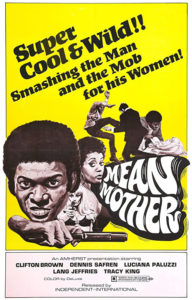 Note: This was originally a Spanish film called Run for Your Life (1971). Producer Samuel M. Sherman of Independent-International Pictures bought it for US distribution, but eventually decided that American audiences wouldn’t come to see it. He re-edited it, added some new footage with black actors and turned it into a “blaxploitation” actioner, re-naming it “Mean Mother”. I need to watch the film to identify Al Richardson because I’m not sure if he is the same person as the football player. So far I haven’t been able to find a copy of this film to watch.