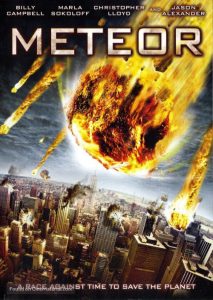 Synopsis: Prof. Lehman discovers in his Mexican observatory earth is about to be hit by asteroid 114 Kassandra, thrice the size of Mt. Everest, more than the meteor which ended the dinosaur age, preceded by a minor meteor shower. Alas on the road back he dies in a car crash. His assistant Imogen has a hard time getting his data home, where the military HQ is inaptly advised by Dr. Nate Chetwyn. LAPD detective Jack Crowe is set up for his wife’s murder by his dirty ex-partner Calvin Stark, who kidnaps his daughter Jenny, determined to make him suffer. That includes Jack’s dad, the sheriff in home town Taft, trying to keep order and organize help as the first debris hits cause damage. Life soon breaks down worldwide, in panic and looting after numerous hits. The military uses its rocket arsenal. The military naively thinks it’s over after 3 quiet hours with a body count over 22,000 worldwide. Imogen continuous her perilous journey, slowly, and warns them Daniel’s calculations were off too in mass, Kassandra broke and the largest part is left. The new debris shower even hits the HQ, all satellite communications go down. The only hope is observing from a space mission, by Morse over ground aerials. The US arsenal being nearly exhausted, the Chinese join, the Russians must be tricked. Vindictive Calvin Stark escapes and gets hold of Jenny, so Jack pursues them all his murderous way to Taft. There his dad the sheriff must control panic after the nuclear power station is hit, and help them face Calvin. Michael gets in even more danger because of ma’s foolish instructions, dad and a fireman heroically come to the rescue.

Note: I didn’t find a trailer of for this film. Above is a preview.