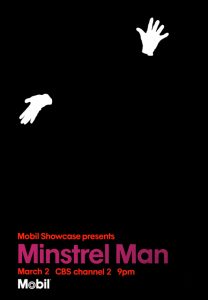 Synopsis: Two black brothers in a traveling minstrel show in the early part of the century have two different goals. One brother is determined to succeed in a field that is dominated by white performers in blackface, and the other is a composer fighting to break away from the stereotypes associated with black minstrel performers.

Note: I didn’t find a trailer for this film. Above is a clip from the film and below is a link to the full movie.