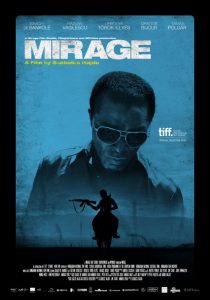 Synopsis: Mirage tells the story of an African football player in a small Hungarian town, who commits a crime and has to flee. He finds refuge on a farm deep in the Hungarian flatland. Soon he realizes that the farm is a modern slave camp where he is forced to fight for his freedom and ultimately his life.