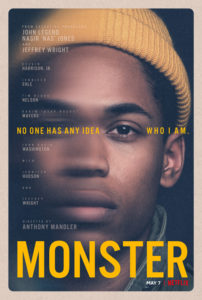 Synopsis: Based on the award winning novel by Walter Dean Myers, the film tells the story of Steve Harmon, a 17 yr old honors student and aspiring filmmaker who gets caught up in a robbery where a murder happens. The film follows his dramatic journey through a complex legal battle for his fight to prove his innocence. READ REVIEW

Note: Produced/Executive Produced by John Legend, Nas and Tonya Lewis Lee. Premiered at the Sundance Film Festival on January 22, 2018. Above is the theatrical release date. Title changed from “Monster” to “All Rise” then back to “Monster”. Premiered on Netflix on May 7, 2021 and received an official trailer.