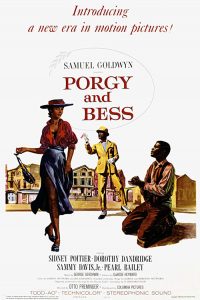 Synopsis: In this legendary Gershwin opera set among the black residents of a fishing village in 1912 South Carolina, Bess – a woman with a disreputable history – tries to break free from her brutish lover Crown after he becomes wanted for murder. The only person willing to overlook her past and offer her shelter is the crippled Porgy. Their relationship is threatened by the disapproval of the townspeople, the presence of her old drug supplier Sportin’ Life – and the threatened return of Crown.

Note: I haven’t found a picture of Margaret Hairston yet, but did find out that she was Jester Hairston’s wife so that gave me somewhere else to look. Also, I did not find a trailer for this film.