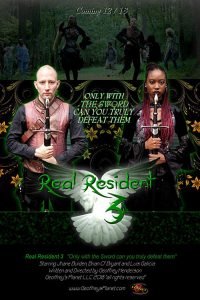 Synopsis: Real Resident 3 is the third and last entry of the real resident saga, it takes place 20 years after REAL RESIDENT 2. In REAL RESIDENT 3 Anna and Frank coincidentally meet from 2 different walks of life. Frank Stallion the son of Kane Macalvey (REAL RESIDENT ) who is a confused and desperate person on the verge of accepting Christ or killing himself. He has broken down after losing his entire family and his job and home. On the other hand Anna Taylor daughter of Jessica Taylor (REAL RESIDENT 2) is a smart and strong woman who takes pride in her career and is investigating the whereabouts of her mom who mysteriously disappeared with her partner Thomas Edwards. Frank and Anna both get the revelation that anger and pride leads to the choice of choosing Good or Evil, having to fight the temptations in the mysterious fantasy world called Marka. The ultimate evil (SIN) manifest in zombies and monsters are ruling this world. Making a choice in the height of their arguments and choosing the white dove over the woman in the mirror will be a great challenge. Now they have to confront a greater evil, but with the Lord fighting on Anna and Franks behave, they can be victorious. But still – they can become distracted if they take the eyes of the Lord. Evil can ultimately win if the focus is on one’s self rather than God.

Note: Not able i identify people in generic roles.