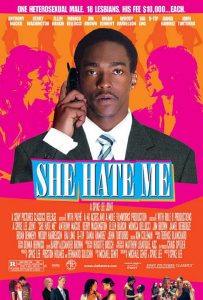 Synopsis: Harvard-educated biotech executive John Henry Jack Armstrong gets fired when he informs on his bosses, launching an investigation into their business dealings by the Securities & Exchange Commission. Branded a whistle-blower and therefore unemployable, Jack desperately needs to make a living. When his former girlfriend Fatima, a high powered businesswoman–and now a lesbian–offers him cash to impregnate her and her new girlfriend Alex, Jack is persuaded by the chance to make easy money. Word spreads and soon Jack is in the baby-making business at $10,000 a try. Lesbians with a desire for motherhood and the cash to spare are lining up to seek his services. But, between the attempts by his former employers to frame him for security fraud and his dubious fathering activities, Jack finds his life, all at once, becoming very complicated.