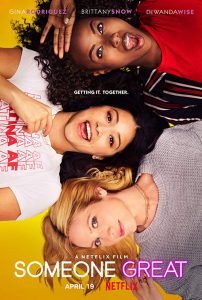 Synopsis: After a devastating break up on the eve of her cross-country move, Jenny enjoys one last NYC adventure with her two best pals. Someone Great is a romantic comedy about love, loss, growth and the everlasting bond of female friendship.

Note: RuPaul is in the trailer but not on the IMDB cast list. I will check closer to the release date to see if the cast list is adjusted or get it from Netflix when the film airs.