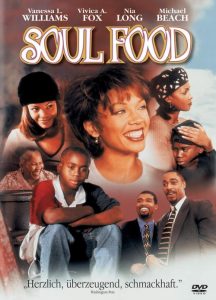 Synopsis: Matriarch Mama Joe has held her family together for 40 years around a Sunday dinner of soul food. When diabetes hospitalizes her, the dinners stop and tensions among her three daughters start to break the family apart. Two of the sisters feud continuously: Teri is jealous of Maxine’s marriage and irritated that everyone assumes her corporate salary is open to the rest of the family’s uses. Maxine resents Teri’s bossiness and insensitivity to family tradition. Bird, the youngest, newly married to an ex-con, accepts a favor from an old lover that leads to her husband’s arrest. Mama Joe’s grandson Ahmad cooks up a scheme to bring the family together, back to the table.

Note: Produced by Babyface and Tracey Edmonds. Music by Wendy & Lisa. There are a lot of other actors in the background of the film that go unmentioned, like the two workers from the salon (who may be Jada and Hamp) that catch Mekhi Phifer home or the audition judges. Also Martell Hill Edmond is listed at Ahmad age 4 but I watched the film twice and don’t see a younger Ahmad.