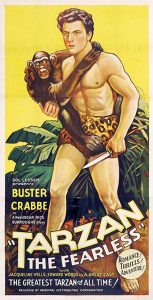 Synopsis: In the African Jungle, a group of Europeans come across the fabled white man who was raised by apes. Tarzan takes an immediate liking to the blond Mary Brooks and rescues her during a nasty storm. Not everyone in the party sees Tarzan as a friend and one of the safari guides, Jeff Herbert, has a written offer of £10,000 for anyone who can confirm that the ape man is dead. Mary’s father disappears however, taken prisoner by those who guard the treasure of Zar. It’s left to Tarzan to rescue him and the others who have been taken prisoner.

Note: Wikipedia lists the different versions of this film which began as a serial.