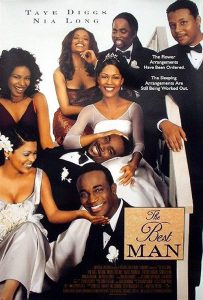 Synopsis: Harper Stewart, a commitment-shy writer and the best man at the wedding of Lance and Mia, is nervous–and with good reason. His steamy new novel hits bookstores soon, and when his friends finally read it he knows they will notice more than just a passing resemblance to the characters depicted in the book. To make matters worse, one of the bridesmaids, Jordan, an ambitious TV producer, has obtained an advance copy of the book–and it’s making the rounds with all his friends. With vows about to be exchanged and friendships renewed, the pressure is on. For by the end of the weekend, scandalous secrets from the book involving close friends and loved ones will be revealed, and everyone will have re-evaluated their friendships with each other, their lovers and with themselves–for better or for worse.