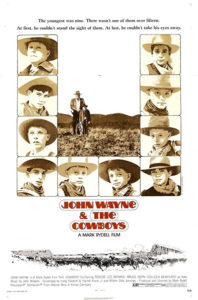 Synopsis: When his cattle drivers abandon him for the gold fields, rancher Wil Andersen is forced to take on a collection of young boys as his drivers in order to get his herd to market in time to avoid financial disaster. The boys learn to do a man’s job under Andersen’s tutelage; however, neither Andersen nor the boys know that a gang of cattle thieves is stalking them.