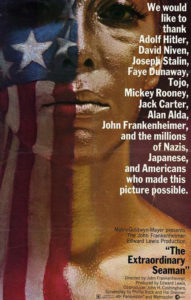 Synopsis: Lt. Commander Finchhaven, a ghostly relic from the First World War, he had fallen down dead drunk on his first assignment and been consigned from the great beyond to sail the seas until a further opportunity arises to redeem his actions. During the Second World War, he is encountered by a quartet of American seamen that includes Lt. Morton Krim and cook W.J. Oglethorpe. A deal is completed whereby the men will help re-float Finchhaven’s command in return for a passage to Australia. They raid a village to secure batteries for the engine and come upon the feisty Jennifer Winslow who offers them aid in return for a passage with the crew. Eventually they reach the open sea. Finchhaven’s ghostly status is revealed and Lt. Krim and Jennifer help him to sink a Japanese cruiser.