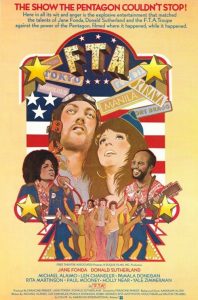 Synopsis: A documentary about a political troupe headed by actors Jane Fonda and Donald Sutherland which traveled to towns near military bases in the US in the early 1970s. The group put on shows called “F.T.A.”, which stood for “Fuck the Army”, and was aimed at convincing soldiers to voice their opposition to the Vietnam War, which was raging at the time. Various singers, actors and other entertainers performed antiwar songs and skits during the show.

The movie opened in theaters in 1972 the same week that Jane Fonda made her controversial trip to Hanoi, North Vietnam. Within a week of its release, American-International Pictures withdrew it from circulation. Director Francine Parker speculated that “calls were made from high up in Washington, possibly from the Nixon White House, and the film just disappeared.” (IMDB)