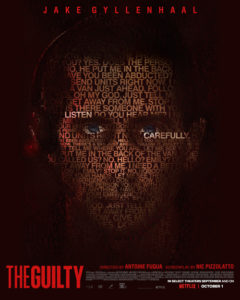 Synopsis: The film takes place over the course of a single morning in a 911 dispatch call center. Call operator Joe Baylor (Gyllenhaal) tries to save a caller in grave danger-but he soon discovers that nothing is as it seems, and facing the truth is the only way out. READ REVIEW

Release Date: October 1, 2021 (USA) | Length: 90 min | Genre: Drama, Thriller | MPAA Rating: Rated R for language throughout. | Note(s): Original announcement. Based on the Danish film “Den Skyldige”. To premiere on Netflix. Antoine Fuqua is also a producer on this project. Byron Bowers was in the original cast list but not in the current one. No good image because the film mainly focuses on Jake G?? and the other actors are just voices or blurs in the background.