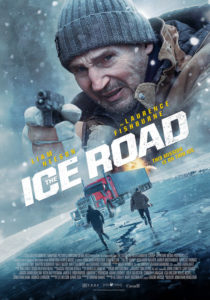 Synopsis: After a remote diamond mine collapses in the far northern regions of Canada, an ice driver leads an impossible rescue mission over a frozen ocean to save the lives of trapped miners despite thawing waters and a threat they never see coming.

Note: The Netherlands release date changed from February 4, 2021 to April 22, 2021 and then to October 28, 2021. The internet release date might be sooner, but still hasn’t been listed. This film is complete but still missing trailer and poster.