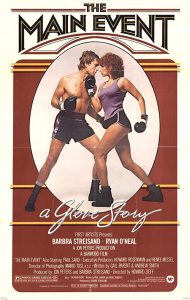 Synopsis: Hillary Kramer, successful Perfume magnate awakes one morning to find that her accountant has robbed her blind and left for South America. Going through all of her remaining assets she finds a boxer, purchased as a tax write off. She decides to take Kid Natural, (Eddie Scanlon) who is much more at home giving driving lessons, into the ring and use him as her key to riches. Eddie thinks this will only get him killed and resists.