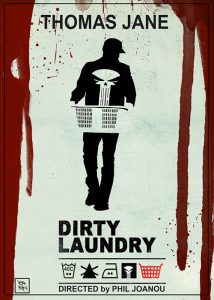 Synopsis: Frank Castle, a.k.a. ‘The Punisher’, wakes up in a run-down neighborhood and leaves his van to do his laundry. On his way to the laundromat, he witnesses a gang led by Goldtooth assaulting a group of prostitutes, but minds his own business. But when the gang mugs a boy named DeShawn, Frank goes to a convenience store to buy a bottle of Jack Daniel’s and use it to club the thugs to death before crippling Goldtooth and pouring the whiskey on him for one of the prostitutes to set the gang leader on fire. Frank then collects his laundry and has DeShawn keep one of his signature t-shirts before leaving the neighborhood.