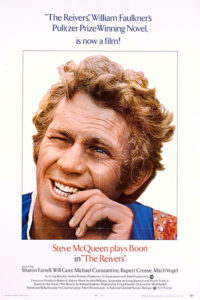 Synopsis: An old man looks back 60 years to a road trip from rural Mississippi to Memphis, a horse race, and his own coming of age. Lucius’s grandfather gets the first automobile in the area, a bright yellow Winton Flyer. While he’s away, the plantation handyman, Boon Hogganbeck, conspires to borrow the car, taking Lucius with him. Stowed away is Ned, a mulatto and Lucius’s putative cousin. The three head for Memphis, where Boon’s sweetheart works in a whorehouse, where Ned trades the car for a racehorse, and where Lucius discovers the world of adults – from racism and vice to possibilities for honor and courage. Is there redemption for reivers, rascals, and rapscallions?

Note: I didn’t find a trailer for the movie, above is a clip from the film.