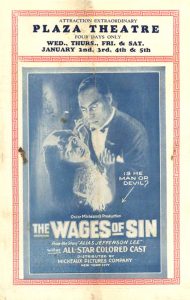 Synopsis: After his mother dies, African-American motion picture producer Winston Le Jaune returns to his home for the burial. His older sister reveals to him that their mother’s dying wish was for him to take care of their younger brother, J. Lee, a ne’er-do-well who has shown himself to be a coward during World War I in France. After returning to the city, Winston sends for J. Lee and gives him a job in the company. J. Lee promptly steals money from the company, putting it into financial trouble, and spends it in cabarets and at wild parties, and on women. Winston fires his brother and is forced to make numerous trips to try to raise money for the company. While away, he meets and falls in love with a woman. They plan to marry, but she suddenly disappears. In Chicago, Winston meets J. Lee and offers him his job back. J. Lee now intentionally destroys the company and betrays his brother.

The only information regarding the conclusion of this film that has been found is that a new and unusual character is introduced at this point; the denouement involves thrills and heroism; and the ending is a happy one.

*The film is considered to be a lost. Still looking for the Chicago Defender article from December 8, 1928, p. 6.