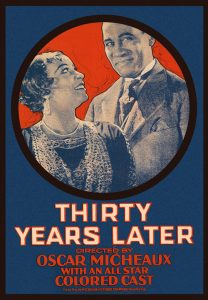 Synopsis: George Eldridge Van Paul, the son of a white father and a black mother, is brought up to believe that he is completely white. He falls in love with Hester Morgan, a black girl, but when she learns that he is white, she refuses to see him. George is later told by his mother of his black heritage, and he becomes proud of his race. Hester then accepts his proposal of marriage.

I can’t find any more information on this film. It may be lost.