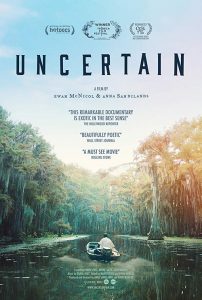 Synopsis: UNCERTAIN is a southern Gothic tale set on the Texas/Louisiana border in a town called Uncertain, population 94. The town sits on the edge of a vast, swampy lake that is being choked to death by an aquatic weed, upsetting the natural balance and the town’s only source of livelihood. As the town struggles to survive, three men each battle their demons. Wayne, an ex-convict who becomes obsessed with killing Mr. Ed, a gigantic boar he hunts as part of his quest to stay sober. Zach, a young diabetic with big ideas but few prospects, is struggling with alcohol and fighting the cycle of poverty for a bigger life. Henry, an aging fisherman reluctantly letting go of his youthful ways, reflecting on a long life, and making peace with one fateful moment thirty years ago.