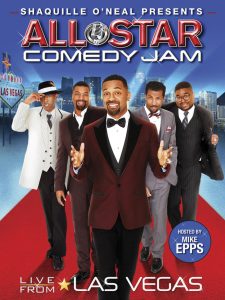 Synopsis: Comedy and film star Mike Epps, known for his roles in the HANGOVER and FRIDAY franchises, takes center stage as the host of the newest installment in Shaquille O’Neal’s ALL STAR COMEDY JAM franchise. Epps called on some of stand-up comedy’s freshest talent to help him bring down the house; Lil’ Rel, Henry Welch, Deon Cole and DeRay Davis. This hilarious lineup delivers nonstop laughs in this high-energy night of comedy. ALL STAR COMEDY JAM – LIVE FROM LAS VEGAS was filmed in front of a live audience at The Joint at the Hard Rock Hotel & Casino in Las Vegas.