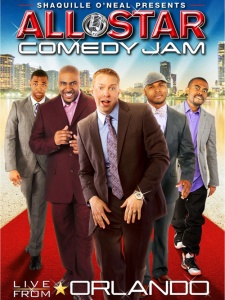 Synopsis: Funnyman Gary Owen, known for his roles in Steve Harvey’s blockbuster hit Think Like A Man and Tyler Perry’s “House of Payne”, commands the stage as he hosts the newest installment in Shaquille O’Neal’s All-Star Comedy Jam franchise. Along with Owen, O’Neal has handpicked some of stand-up comedy’s most talented and sought after comedians; Capone, Lil’ Duval, Tony Roberts and Jay Pharoah. This fresh new lineup is sure to deliver non-stop laughs in this energetic and memorable night of comedy. All-Star Comedy Jam – Live from Orlando was filmed at Hard Rock Live in front of a live audience during All-Star Weekend in Orlando, FL.