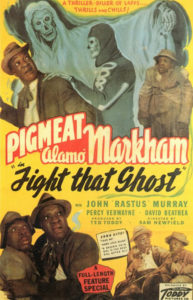 Synopsis: Pigmeat and Shorty, who own “Pigmeat and Shorty’s Bootery”, are told by their landlord to either pay up or get out. They get caught trying to short-count him, and he threatens to have them arrested. After a series of disasters–they ruin a customer’s suit, their store blows up–they get a telegram notifying them that a man they once did a kindness for has left them quite a bit of money and a house, but in order to get the inheritance, they have to spend a night in the bedroom of the man’s house. When they arrive there, they notice two things–the place is kind of creepy and a series of spooky incidents leaves them to believe the house is haunted.

Note: I would need to watch this film to better identify people but the DAARAC has it listed as LOST.