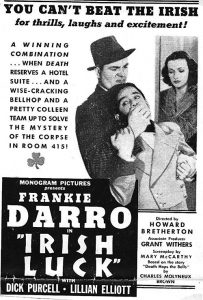 Synopsis: Buzzy O’Brien is a bellhop in a hotel where a guest is murdered. The police blame Kitty Monahan and Buzzy succeeds in helping her escape and hides her at his home with his mother. Buzzy and his pal Jefferson manage to fumble their way to finding the real killer who was after the stolen bonds carried by the victim.