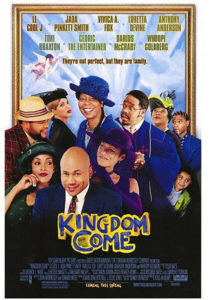 Synopsis: This family has issues! When mean and surly Bud Slocumb keels over at breakfast, his family gathers for the wake and funeral: long-suffering widow Raynelle, unemployed son Junior who’s cheating on his wife Charisse, son Ray Bud who holds a job and has a loving wife, Lucille, but struggles with alcoholism and with their difficulty having children. There’s younger daughter Delightful, who constantly eats; religious Aunt Marguerite and her wayward son Royce; and, there’s Juanita, their wealthy cousin’s wife. They all descend on the town of Lula, struggle to say something nice about Bud, and face the challenge of sorting out their relationships with the living.

Note: Based on a play David Dean Bottrell and Jessie Jones.