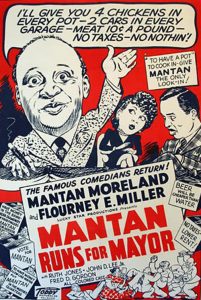 Synopsis: After collecting his usual meager paycheck, Mantan, a part time janitor at the local courthouse, commiserates with his ne’er-do-well friend Alex, who is similarly poorly paid. Since Mayor Henry Corbit has been arrested for drunken driving and sentenced by the famous “poetical” judge, Alex comes upon the idea of having Mantan run for mayor, with Alex serving as his campaign manager. Mantan and Alex then go over to Susie Que’s Restaurant, where Alex orders up a feast, figuring that Mantan will pay the bill. Aware that Susie has plenty of money, Alex encourages Mantan to flirt with her, but Mantan is frightened of the hefty Susie, who towers over him. Nevertheless, Susie is smitten with Mantan and agrees to finance his mayorial campaign.

Johnny Lee, Mantan’s opponent, becomes angry when his posters are replaced by Mantan’s and criticizes Mantan as an upstart who knows nothing about politics. In the meantime, Alex tries to teach Mantan how to be a public speaker, but spends most of his time spending Susie’s money on expensive cigars and suits. Lee approaches Mantan in order to make a deal whereby one would sell the other his votes, but neither candidate has any money, so Lee suggests a crap game as a means of settling the question. Lee confuses Mantan’s ignorance of dice games with cheating and, frustrated, leaves the game in a huff.

At Mantan’s big rally, Lee claims that Mantan gambled him out of votes, while Mrs. Johnson, Mantan’s and Alex’s landlady, shows up demanding three months back rent. The police remove the heckling Lee from the audience, after which Susie shows up for Mantan’s speech and quickly learns that Mantan has been showering his campaign secretary with flowers and candy paid for by Susie. Mantan begins his speech, promising two chickens for every pot, while Lee sneaks back into the hall, using Susie’s ample girth as a cover. As Mantan tries to finish his speech, Susie loudly announces that she will no longer finance Mantan’s campaign. Then, with Lee’s help, she removes Mantan’s expensive suit, leaving him at the podium in his underwear. Now back to where they began, Alex reminds Mantan that he owes him five bucks. (TCM)

Note: I haven’t found any other information about this film. It may be lost. I wasn’t able to identify Fred Gordon or Ruth Jones.