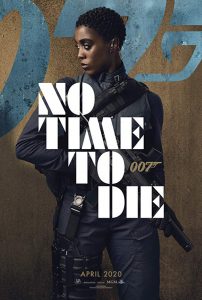 Synopsis: Bond has left active service. His peace is short-lived when his old friend Felix Leiter from the CIA turns up asking for help, leading Bond onto the trail of a mysterious villain armed with dangerous new technology.

Release Date: October 8, 2021 (USA) | Length: 163 min | Genre: Action, Adventure, Thriller | MPAA Rating: Rated PG-13 for sequences of violence and action, some disturbing images, brief strong language and some suggestive material. | Note(s): Lupita Nyong’o was originally listed as being in the cast but I don’t see her name now. I will check again closer to the release date. Bond 25 finally got an official title. UK premiere date was April 3, 2020 and the US date was April 8, 2020. But the release dates were moved back to November because of the corona virus. Release date moved to 2021. To premier at the Zurich Film Festival on September 28, 2021. Above is the theatrical release date.