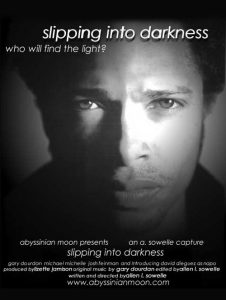 Synopsis: Who will find the light?

Note: I found this poster on my hard drive. The file date was 2003. I don’t know if this movie was ever made or ever released. I didn’t find an IMDB listing for the movie anytime around the time I originally found the poster. IMDB does have the title “Slipping into Darkness (2018)” as being in development, written and to be directed by Sowelle, but produced by Lisa Andoh and Bonnie Ann Burgess. The poster says the movie was written, directed and edited by Allen L. Sowelle and starring Gary Dourdan, who also is credited as creating the original music for the film, but this version was produced by Lizette Jamison. The URL on the poster doesn’t work. There is a production company by the name Abyssinian Moon listed on IMDB. They produced Sowelle’s “60 Seconds of Distance” and “Wanted: Souful Energy Xchange“. I thought maybe it was actually a poster for “Wanted” because both movies starred Gary Dourdan and Joshua Feinman, but that movie starred Mari Morrow instead of Michael Michele and David Dieguez is not on the cast list for “Wanted”. Also “Wanted” seems to be about a lighter subject than the poster for “Slipping” suggests. I’ll keep looking for into on this to prove one way or another if this film ever existed but for now I’m moving it to Lost.