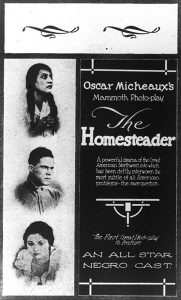 Synopsis: Jean Baptists, a homesteader far off in the Dakotas is living where he is the only black. To this wilderness arrives Jack Stewart, a Scotsman, with his motherless daughter, Agnes. In Agnes, Baptiste meets the girl of his dreams. Knowing that a relationship with Agnes would not work, he goes back to his own people and marries the daughter of the preacher. The fact Baptiste does not get along with the father-in-law, eventually wears on the marriage. Baptiste heads back to the Dakotas where he finds the girl he first discovered. Later, he learns the truth about her race and the story has a beautiful ending. She has a little Negro blood racing through her veins.

from AFI: This was Oscar Micheaux’s first film. Micheaux’s company was located in Chicago. Contemporary sources disagree on whether Micheaux or Jerry Mills was the director. One contemporary source cites black film pioneer William Foster as doing “detailed service” on the production. Micheaux’s production company is alternately called the Micheaux Book and Film Co. and the Micheaux Film Co. in ads. Modern sources call Evelyn Preer’s character Orleans instead of Orlean. Some information in the plot synopsis comes from a 1927 interview with Preer. Micheaux’s 1948 film The Betrayal is sometimes described as a loose remake of The Homesteader.