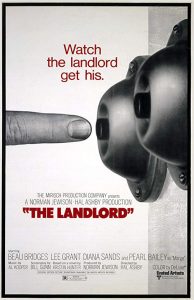 Synopsis: At the age of twenty-nine, Elgar Enders “runs away” from home. This running away consists of buying a building in a black ghetto in the Park Slope section of Brooklyn. Initially his intention is to evict the black tenants and convert it into a posh flat. But Elgar is not one to be bound by yesterday’s urges, and soon he has other thoughts on his mind. He’s grown fond of the black tenants and particularly of Fanny, the wife of a black radical; he’s maybe fallen in love with Lanie, a mixed race girl; he’s lost interest in redecorating his home. Joyce, his mother has not relinquished this interest and in one of the film’s most hilarious sequences gives her Master Charge card to Marge, a black tenant and appoints her decorator.