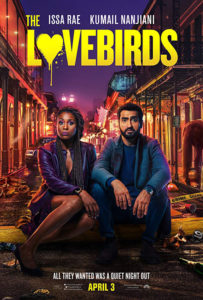 Synopsis: A couple (Issa Rae and Kumail Nanjiani) experiences a defining moment in their relationship when they are unintentionally embroiled in a murder mystery. As their journey to clear their names takes them from one extreme – and hilarious – circumstance to the next, they must figure out how they, and their relationship, can survive the night. READ REVIEW

Note: This film was suppose to premiere at SXSW Film Festival on March 14, 2020, but the festival was cancelled. Theatrical release date was set for April 3, 2020 but that was also cancelled, so the movie will premiere on Netflix on April 3, 2020.