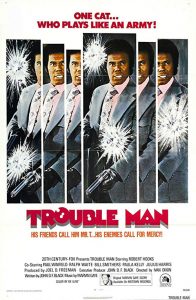 Synopsis: It seems that masked men are knocking over the floating crap games of Chalky and Pete. Chalky and Pete hire the cool, loose, elegant Mr. T to fix things. Then, the masked manipulators set up the death of a collector for a rival gang lord. It looks like it’s up to T to keep a gang war from breaking out, keep the police off his back, and earn his fee from Chalky and Pete. Then things get complicated. A pool hall, a boxing gym, women’s well-furnished apartments, and the mean streets of L.A. give T room to sort out what seems from what is.