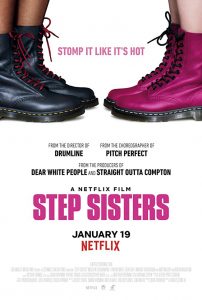 Synopsis: Jamilah has her whole life figured out. She’s the president of her black sorority, captain of their champion step dance crew, is student liaison to the college dean, and her next move is on to Harvard Law School. She’s got it all, right? But when the hard-partying white girls from Sigma Beta Beta embarrass the school, Jamilah is ordered to come to the rescue. Her mission is to not only teach the rhythmically-challenged girls how to step dance, but to win the Steptacular, the most competitive of dance competitions. With the SBBs reputations and charter on the line, and Jamilah’s dream of attending Harvard in jeopardy, these outcast screw-ups and their unlikely teacher stumble through one hilarious misstep after another. Cultures clash, romance blossoms, and sisterhood prevails as everyone steps out of their comfort zones.

Note: This movie was suppose to be released on March 31, 2017 but I still didn’t find a trailer or movie times so I’m not sure it’s actually been released. Since March the movie has received an MPAA rating and is marked as completed but still no release date. Rotten Tomatoes has the release date at being December 31, 2017 at limited theatres. The release date was moved again to January 19, 2018.