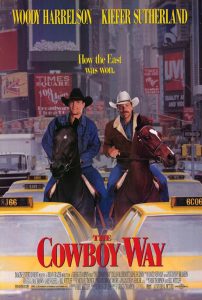 Synopsis: Buddies Pepper Lewis and Sonny Gilstrap who are championship rodeo partners travel to New York to find their missing friend, Nacho Salazar after he disappears in New York City to pick up his daughter, Theresa. When Pepper and Sonny find that neither is anywhere to be found, they go about the wacky adventure of finding Nacho and Theresa, and in the process, test the foundation of their friendship. Along the way, they find themselves entwined in the inner workings of a New York sweat shop where Theresa has been enslaved after traveling to the U.S.A. from Cuba. Going about doing things in a cowboy way, Pepper and Sonny put their small town skills to the test in a big city kind of way and rescue Theresa from the thugs.